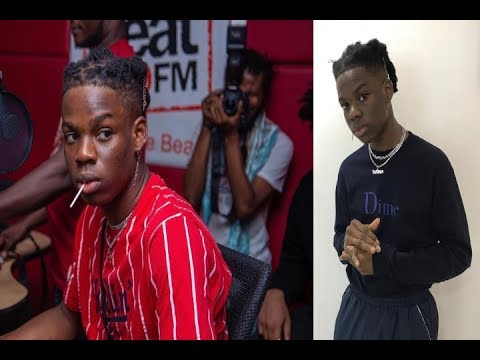 Contents
Rema Biography, Net Worth, Real age and other information about the Mavin’s most loved artist.Rema BiographyRema Bio-data (must read)Rema BiographyREMA DATE OF BIRTH: Born in 2000Rema Breakthrough storyRema Awards: Next rated award as viewers choice awardRema has gained recognition worldwide.Early life of REMA:His journey into the music industry

Rema Biography, Net Worth, Real age and other information about the Mavin’s most loved artist.

Lots of Rema biography entry has been posted but most of them are outdated. In this post we will attempt to update all the information about Rema Biography but read through for a short intro on Rema Biography.

Who is Rema: Rema born Divine Ikubor is Mavin’s most sorted artist. Coming with a new style of music that tends to blend trap and afrobeats Rema changed the game of Nigerian music and Africa. Rema since after signed to Mavin’s record remained the hottest making headlines too. The recent among the list is Rema being aired on Billboard.

Before we ever begin have a quick look at the bio data to learn easily all the information about Rema that is discussed in this post.

Divine Ikubor popularly called Rema, is a Nigerian singer and rapper. He is associated with trap music infused with afropop. Rema go signed to a record deal In 2019 with Jonzing World, a subsidiary of Mavin Records. Right after the signing he released the first song Dumebi, which made airwaves and topped several music charts in Africa.
This got so many attention from international music scene and Rema threw another hit up for his fans which was titled IRON MAN.
Rema rose to prominence with the release of the song “Iron Man” made an entry into the songs on USA former president Barack Obama’s 2019 summer playlist.

Rema was born in 2000 in Benin City, Edo State into a Christian family. Rema had both his primary and secondary school education in Edo State.
Like other artist who had made success, Rema grew up singing and rapping while in secondary school and also in the church where he was a member of the church choir.

Rema formed a group called RnA In 2013 with his friend Alpha P. The group’s name came from a combination of the first letters of their stage names. At this stage they won season 2 of Pikolo’s Dream Alive talent show.
This attracted their signing a record deal with Peak Entertainment with a release of their debut single “Mercy”.  The song wasn’t much popular although they went ahead to shoot the video which was directed by Whyte House Pictures.
Rema and his group through this gained minor exposure following their performance at the Glo Slide and Bounce concert series in Benin and Lagos.
Withing time Rema got signed to a record deal with Jonzing World, a subsidiary of Mavin Records. Under the record label he released his eponymous debut EP Rema in 2019 which peaked at number 1 on Apple Music Nigeria. Rema won Next Rated Award on 19 October 2019, and was nominated for Viewer’s Choice Award at the 13th edition of The Headies.

Rema music is being revealed on former America’s president Barack  Obama’s Playlist as we said above. This is a new development in Nigeria music industry and a good sign for us to update Rema Biography. On this updated information about Rema biography you will be informed about things like:-

Rema is a 19 year old musician who got signed newly to Mavin’s record after a long search when Reekado Banks and Tiwa Savage exit Mavins after completing their contracts. Rema matches a perfect analysis of what I said above. I’m so glad to witness this development. Now let’s talk more in details about who REMA is, rema biography, his lifestyle and more. Divine Ikubor whose stage name is REMA is 19-year-old. He grew up in Benin city into a Christian family.
REMA lived his early life in Benin city rapping in church and school at a tender age. REMA while still in school moved on to create his own live band and not so long until he was discovered by D’Prince the Jonzingworld record boss who is Don Jazzy’s biological brother.

His journey into the music industry

REMA born Divine Ikubor is an emerged artists who recently got signed to Mavin’s/Jonzingworld records. Rema started his career early enough just like I said above with a great vision of what he wants to achieve which has come off a dream come true.
He was discovered by Don Jazzy’s junior brother DPrince who owns Jonzingworld records. According to D’Prince “When I first heard Rema’s work I knew this was an artist I wanted the entire world listening to; his talent and artistry are so far beyond his years.”
D’PRINCE moves to discover more artists alongside Mavin Global. He says this will be people with exceptional talents like him.
According to Don Jazzy Mavin boss “Rema is a formidable young artist: with his skill and versatility, he has a unique place in the future of Afro beats. At the same time, we’re excited to launch our first imprint deal with Jonzing World” he revealed.
This model will expand the number of ways the Mavin platform can support artists and entrepreneurship in Africa to grow together, at home and internationally,” he stated more.