Telecommunication companies in Nigeria have been ordered by the federal government to block all outgoing calls on unlinked SIM cards.

You are here because your line has been blocked? Then continue reading.

Attention: You can now advertise your products on Onuahia.com free.

The Federal Government directed all Telcos to strictly enforce the Policy on all SIMs issued (existing and new) in Nigeria. This has caused so many people pain as their lines have been blocked without even them knowing it.

What NCC is saying about sim blocking

Blocking  of the registered SIM cards stool effect from April 4, 2022.

President Buhari has determined that the NIN-SIM Policy implementation should proceed.

This is why so many people that have called me this morning got their unlinked number blocked.

How to unblock your sim

To unblock your sim which was blocked due to unlinked nin follow below steps.

Related Article Today's top Gospel Songs and Gospel Musicians in Nigeria - Who are they?

Note that the queue will be much and you should be there early if you don’t want to waste the whole of your day.

How to unbar your mtn sim

If your MTN sim was barred from making phone calls, download the MTN Mobile app and unbar it yourself.

The app is available on Playstore for Android users and Applestore for IOS Users. 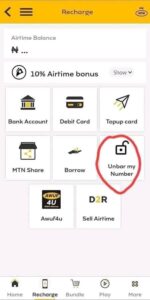