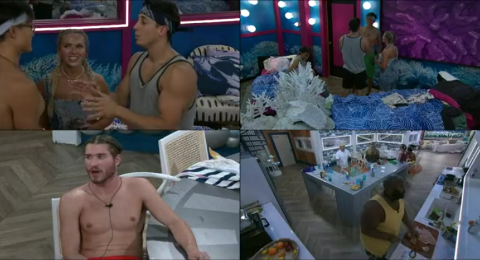 8:10 — Big Brother 23 spoilers: Now we see how Tiffany and Hannah have made a final two together. It’s weird but I’m not sure I love this for Tiffany’s game. I feel like Tiffany is playing a great game so far, but I’m not sure about Hannah. I hope this doesn’t end up being Tiffany’s downfall down the line. What I do think is super smart is Tiffany’s Cookout-plus-Duo plan. That is super smart. Everybody has a partner outside of the Cookout to keep the heat off of them and someone who can go home if the duo gets put on the block. Tiffany-Claire, Kyland-Sarah Beth, Hannah-Derek X, Azah-Britini, and Derek F. doesn’t need anybody. So who does Xavier have? Alyssa?

8:30 — Big Brother 23 spoilers:There is a lot of filler here. Derek F’s dance, Tiffany getting mad about nobody saying “good morning” to her, Whitney not getting any votes to stay, etc etc. Let’s get to the vote! 8:40 — In her exit interview, Whitney thinks she was evicted because she’s a huge advocate for female empowerment, so the guys were very scared of her. Huh. If she was so into female empowerment, why wouldn’t she have gotten an all-female alliance together in week one?

8:50 — Julie tells the houseguests the team twist is over. Time for the next HOH and it’s endurance! Bring it on!

9:00 — The HOH comp is the annual wall comp. They are standing on a very narrow ledge on the side of a boat. They have handholds and goggles, but that is about it. The wall immediately started tilting forward and backward and the shower of rain started shortly thereafter.

9:07 — Feeds are back. It looks like no one fell in the time it took the feeds to come back, everybody is still in it.

9:15 — The boat “passengers” above each houseguest start puking green slime onto the competitors. LOL.

9:25 — Everybody except Derek F. is still hanging tough.

9:30 — Claire drops when the wall tilts very far forward. Everyone else is still up there.

8:55 — Kyland and Britini are shifting a lot up on the wall, they look very uncomfortable. The rest of the houseguests looks cool as cucumbers. And then on the next wall tilt, which was three big ones in a row, Kyland falls on the third tilt, so he is out.

9:05 — On the next wall tilt with rain pouring down, Britini falls and then there were five: Alyssa, Derek X, Tiffany, Azah, and Xavier.

9:15 — Azah is the next houseguest out on the next big wall tilt, followed shortly by Tiffany. So the next HOH will be either Alyssa, Derek X, or Xavier.

9:20 — In a stunning turn of events, Alyssa dropped. She looked like she was really gonna go the distance. So it’s down to Xavier and Derek X.