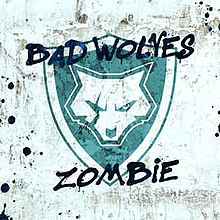 Bad Wolves – Zombie a new wave in music.  “Zombie” is a protest song by Irish alternative rock band The Cranberries.

According to wikipedia, the lyrics and chords of “Zombie” were written initially on an acoustic guitar in Ireland by Dolores O’Riordan alone late at night, during the Cranberries’ English Tour in 1993.